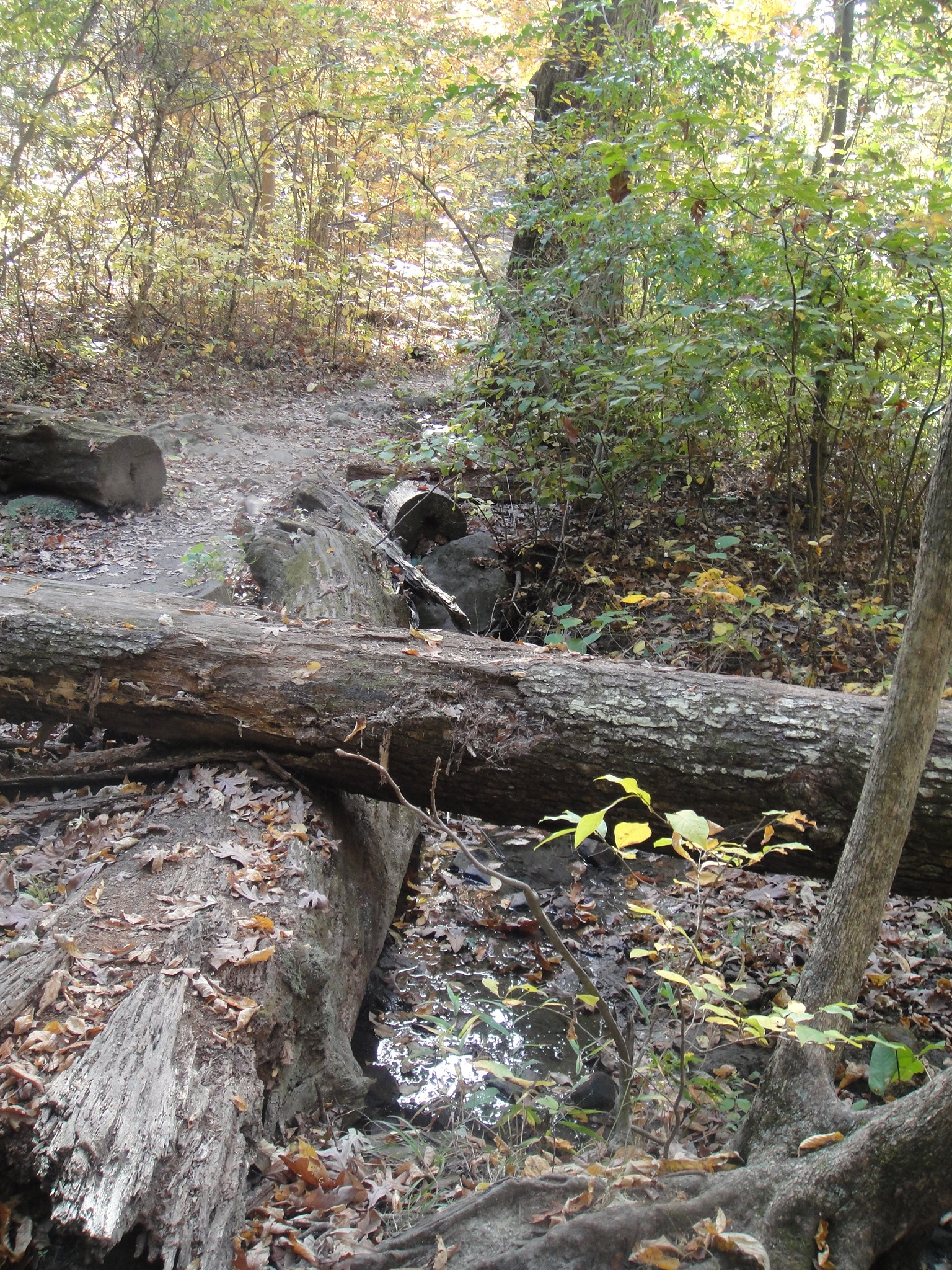 Will County Historical Research and Recovery Association members are avid hobbyists that spend many hours enjoying the great outdoors and the pursuit of lost treasures and relics.

We find coins both modern and old. Often we find lost jewelry and other articles. Unfortunately much of the time there is no way to identify the owner of a lost item. Occasionally circumstances allow us to reunite a lost treasure with its owner.

If you have lost something and would like our assistance in attempting to recover the item, send an email to info@wchrra.org. Click on the Find It Services link for additional information.

Other stories here are about WCHRRA members that go out of the way to help out the environment, people, government agencies and other events.

The stories here are about our members and their good deeds.

The following email from Arlen P. came afew days ago and it just shows that this metal detecting hobby is one that has benefits beyond just finding coins.

Hi Chester. Sorry I missed the picnic, but still not doing too much after I had a heart attack, but I had a good day. I was approached my a neighbor by the park I detect. He asked if I could look for lost jewelry and I told him I could try. He said it had been missing for a year or 2. It was lost in a 20 by 30 foot area. After initially searching Friday, I searched for about 90 minutes, when checking a weak signal, up pops the ring. No one was home, but a neighbor texted the wife, Sue and an hour later I returned the long lost ring, Found it, it was lost in 2009 or 2010.
Was a great feeling returning the ring which was worth well over $10,000. She wanted to give me 250 dollars, but I declined. I did agree with a hug. Told her I was a member of WCHRRA and any member would assist freely for lost jewelry. I now understand being able to reunite someone with a lost heirloom.                 Platinum band with square cut diamond and 8 diamond chips

Thank you Darren Brooks!!
I lost my mom's class ring in April of 2012 and my mom has been recently asking about it. I felt awful and decided to search for it even more, but I needed major help. My superintendent at my school told me about Darren; so, I contacted his wife and within two days we got together at the local park and he found the ring in less than a half hour! I have never been so relieved and ecstatic in my life. I feel like I owe him my life because this ring means so much to me. Thank you again, Darren!
Becca

Chester,
I don't know whether or not this qualifies as a good deed story, but it made a lady happy.
While doing some lunch break detecting at work I found a little blue aluminum dog tag with the name Daisy Belle, a phone number, and the owner's address on it in a grassy area of a public park about 3" down. With a little Internet research, I found the email address of the owners and sent them a note explaining that I had found Daisy Belle's tag while I was metal detecting and asked if they would like to have it back.
The lady wrote back saying that their Black Lab Daisy Belle had passed away a couple years ago, and that the tag I found was lost when she was being watched by friends at least 5 years ago. She was happy that I found the tag because when they finally made the decision to put Daisy down the vet forgot to give them back her collar and tags that they would have liked to keep to remember her by. She explained that the tag I found was the one that Daisy wore most of her life. Today I mailed the tag back with a note stating that I hope the tag brings back fond memories of her friend Daisy.
It was nice to make the lady happy.

The second story was referral from one of our club members, Wes R.

WCHRRA member Wes R received a phone call from a friend about a lady, Shirley, in Lisle that needed some help finding a lost ring in her backyard. Since the location was only 10 minutes away from Sharon K's house, she went out to the Shirley's home to see if she could find the ring.
Shirley recently lost her husband a couple of months ago and gave each of her children a keepsake. One son received his father's watch, the other son received his father's wedding band that was replaced after it was lost in the garden. and the daughter received her fathers gold necklace. After some family discussion there was a concern about who got which keepsake. That's when Sharon took the call to look for the original lost ring.
Arriving on site, Shirley showed Sharon the area in the garden she thought her husband lost the ring while rototilling. Sharon hunt the area without any luck initially and expanded the search area to the entire backyard. Shirley's son stopped by and provided some additional details.
After hunting a section, Sharon realized that her inline pinpoint probe was turned on and she immediately went back over the same area. When she retraced her steps, the Fisher F75 sounded off with a target and digging the plug revealed the ring neatly sitting in the rolled over plug.
Shirley was overjoyed at the discovery of the wedding band which had been lost over ten years. Finding the orignal wedding band made what was a sad time in Shirley's life a bright moment in time for Shirley and her family.

Another Good Deed by & from Darren B.

Chester,
My ex-neighbor called me and said a friend had lost a wedding ring in her yard. I contacted Anne and was told she had a good idea where she lost it. She and her children had looked for a hour or so on hand and knees with no luck. I went to her house Thursday night after work. Luckily she was pretty close with her approximate drop sight. Took about 5 minutes to find the ring. The look on her face when I hollered "I found it" made my day. That's what makes this such a great hobby. I have enclosed a copy of the thank you card she sent. 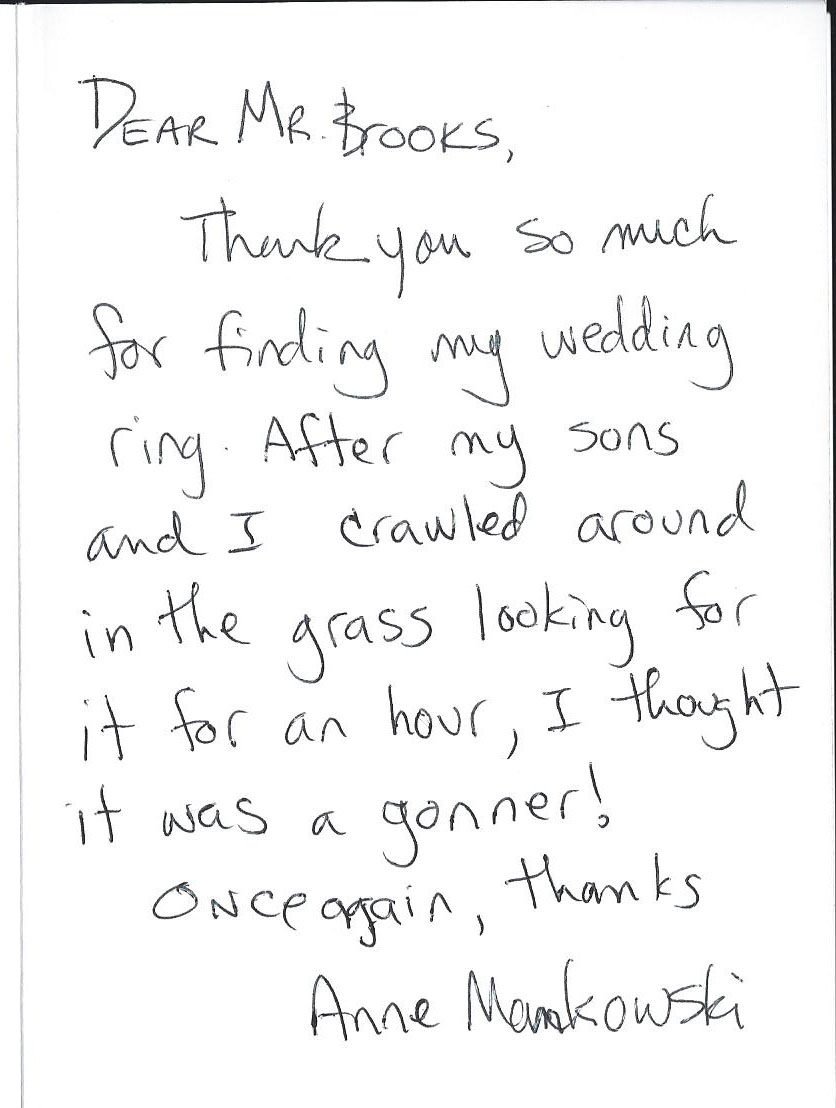 WCHRRA Find It Service received an email asking for assistance in finding a lost engagement ring by an insurance agent and his client. The ring was lost two weeks before and after an exhaustive search by the owners, they retraced their steps but no luck. The insurance agent contacted the club through the our infor@wchrra.org email asking for help. Chester and Sharon volunteered to come out on what was a cold and rainy Saturday afternoon and after two and a half hours of searching Sharon located the lost ring in a flower bed along the foundation of the house under a flower pot. In addition the 1/2 carat diamond, 14kt white gold ring, Sharon also found a S/S charm lost over 20 years before in the back yard and a gold colored Avon ring which was lost by the owners daughter several yaers ago.

Recently one of our club memebers was out enjoy the first warm days of spring. Dee was in Pilcher Park and spotted a backpack laying in the grass. Being a treasure hunter,  her instincts kicked in and she went over to the backpack and discovered it contained among other things a family Bible. Dee contacted Rose Paneri of the Joliet Herald and was successful in locating the owner.

We received the following email from Erin and Scott. Scott was out playing snowball catch with their dog after the first big snowfall of the year. While tossing snowballs back and forth, Scott's wedding ring flew off and was lost in the snow. Chester was able to go that Saturday to Bartlett, IL and after talking with Scott, he mapped out a grid in the common area of the townhouse complex and was able to find the ring about eight feet from where Scott thought he lost it. It was a great way to start Erin's and Scott's Christmas holiday.

Dear helpful Metal Detector / recovery person,
My husband was in our front yard (which is a common area outside our townhouse).  He was playing in the snow and was throwing snowballs and his wedding ring slipped off his finger.  This just happened tonight.  It is a crazy snowstorm out, but we tried and tried to find it with no luck.  We moved some of the snow around, shoveling it up, and even tried to melt it in buckets with hot water.

We have only been married a year and my husband feels horrible about this.  Is there any way someone could come out and use the metal detector...even with all this snow?  We live in Bartlett, IL.

Thanks for any help you can give.
Erin Bracken

When my husband was playing in the snow with our dog and throwing some snow balls back and forth with me, we never thought the outcome would be that he would lose his wedding ring!  Only having been married a year, he sometimes still isn't used to wearing jewelry--especially a ring.  The cold snow on his hand made it so the ring slipped right off.  We looked and looked for the ring , but we were really worried that the more snow that kept falling would make it a lost cause to find it.  We actually thought we would have to wait until spring for all the snow to melt and even then we thought it would be an unlikely chance that we would find it.

We are so grateful for your kindness and your willingness to come out and look for the ring!  We are so appreciative that you found it!  It sounds like you and the Will County Historical Research & Recovery Assoc. do some wonderful work for others while doing something you truly enjoy.  Thanks for your "good deed" and we will think of you and your kindness often, especially when looking at Scott's ring!  We also plan to "pay it forward" and make sure that we do good deeds for others.

Thank you,
Erin and Scott Bracken